Housetraining a puppy requires time, vigilance, patience and commitment. You can minimise house soiling incidents, but virtually every puppy will have an accident in the house at some stage and should be expected. The more consistent you are in following the basic housetraining procedures, the faster your puppy will learn acceptable behaviour. It may take several weeks to fully housetrain your puppy and with some of the smaller breeds it might take longer. A puppy can usually be considered reliably housetrained when it has not had any accidents for two to three months.

Your puppy will do best if they are taken outside on a consistent and frequent schedule. They should have the opportunity to go to the toilet at these set times:

Choose a location not too far from the door to be the “toilet” spot.  Initially use a lead and then off lead. Stay outside with your puppy and wait for them to toilet, choose a phrase such as “go toilet” that they can associate with toilet time and praise them/reward with treats instantly after they go. If you clean up an accident in the house, take the dirty rags or paper towels and leave them in the toilet spot outside to help your puppy recognise the area as the place they are supposed to go to the toilet.

Don’t give your puppy an opportunity to toilet in the house. Watch them at all times when they are indoors and look for signs that they need to go to the toilet, like sniffing around, circling or disappearing behind the couch! When you see these signs, immediately take them outside, on a lead, to the toilet spot. If you cannot supervise them 100% then they should either be outside or in a small confined space like a crate.

When you’re unable to watch your puppy closely, they should be confined to an area small enough that they won’t want to go to the toilet there – it should be just big enough for them to comfortably stand up, lie down and turn around.  This area could be a portion of a room, blocked off with boxes or baby gates, or you may want to crate train your puppy and use the crate to confine them (see ‘Crate Training’ in our next article). If your puppy has spent several hours in confinement, make sure to take them directly to their toilet spot before doing anything else.

Expect your puppy to have accidents in the house – it’s a normal part of housetraining.  Puppies don’t often gain full bladder control until around six months of age, so there WILL be accidents.

When you catch your puppy in the act of toileting in the house, do something to interrupt them, like making a startling noise (be careful not to really scare them) or clapping your hands.  Say “no” and then immediately pick them up and take them to their toilet spot, praise and give them a treat if they finish toileting there.

Don’t punish your puppy for going to the toilet in the house – they don’t instinctively know that they’re not supposed to.  Rubbing your puppy’s nose in it, taking him to the spot and scolding him (or any other punishment or discipline) will only make him afraid of you or afraid to go to the toilet in your presence.  Animals don’t understand punishment after the fact, even if it’s only seconds later. Punishment will do more harm than good.

Cleaning the dirty area is very important because puppies are highly motivated to continue going to the toilet in areas that smell like urine or faeces.  Don’t use ammonia based disinfectants as this is a similar smell to urine – you should use detergents, a pet odour eliminator or something acidic like a little bit of vinegar and warm water.

Toilet-training can be tiring and often frustrating, but committing to establishing a routine early on in your puppy’s life means you will reap the rewards later on (think of the sleep-ins and reduced loads of laundry!) 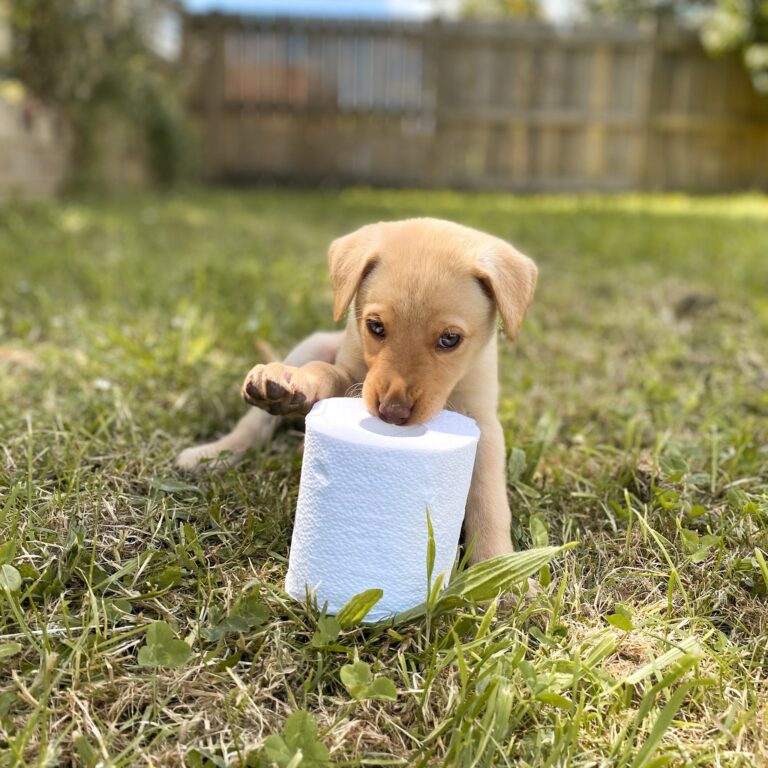